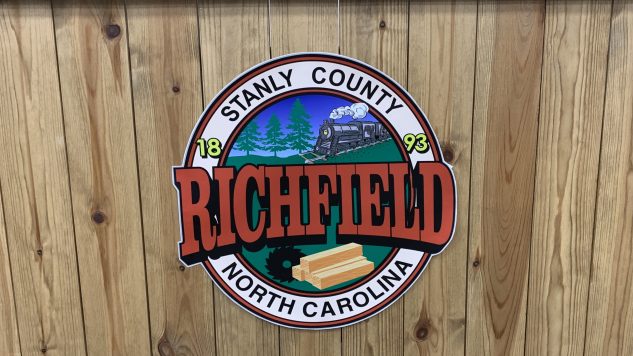 Tensions erupted at Monday’s meeting of the Richfield Town Council concerning the development of Tyson Park.

The park, which is behind Richfield Elementary, has been the subject of previous council meetings in terms of the routing of the Falcon Club trail either around or through the property.

In Monday’s meeting, Dr. John Risley spoke to the council about an offer he had received from an anonymous source. The offer was for $100,000 towards the construction of what Risley called “an NBA/college basketball court.”

Risley spoke about the Richfield Park and its many amenities, but added, “walking to the park is not easy with the heavy traffic on Highway 49 and the absence of sidewalks.” He also said walking access from the town to the park “will probably not improve when Highway 49 is widened to four lanes in the future.”

Risley said it is time for the town to begin development of Tyson Park as a family park “within walking distance for many of the residents.”

He shared his vision for the park, which could eventually include multipurpose fields, an amphitheater, an events center and several other recreational features.

The anonymous group, which Risley said made the offer to a friend of Richfield United Methodist Church, “seeks to work with the Richfield Town Council indirectly through Richfield UMC to make this a reality.”

Councilman Kevin Almond, who is in charge of parks and recreation for the town, asked where the court would go. Risley said a proposed entrance would be near the end of Third Park Drive by Magna Machining.

“I would think the town would need a whole lot more information than what we’ve just gathered,” Councilman Barry Byrd said.

He further said the board would need to know who the contributor is along with specifications and liabilities involved in the project.

Almond suggested to improve Richfield Park instead, possibly with a new sports complex.

Cindy Scott, who works with the Richfield UMC lunch program, answered Almond’s suggestion, saying Tyson Park “would be a good place for a family park.” She cited Gold Hill as an example of a town with a park to host events.

“Why would you not want to make something else out of another place if you’ve got somebody willing to do it for free?” Scott asked. “All these people are asking for is if you’re interested.”

Zina Risley said the town would need a park committee with a long-term plan in order to secure state and federal grants for the park.

Councilwoman Cynthia Heglar asked, “How many in here would be willing for their taxes to go up for the maintenance of this park? If we have 600-something residents, do we need two parks?”

Scottie Heglar spoke up from the audience: “I think most residents of Richfield would not support two parks.”

Almond asked why the money could not be put into Richfield Park.

“What parent is going to let a child ride a bicycle down (Highway) 49?…Why do we need two parks? Because poor people don’t have access to this one,” he said.

Misenheimer said children who don’t belong to the local youth athletics organizations do not have access to the baseball fields from March to October, or for the Richfield gym.

He said many families can’t pay their bills, or afford the $75 fee to join the organization.

Misenheimer also accused the park of being anti-Black, saying goals were put up in the parking lot, but when softball leagues were playing the cars would park under the goals and not allow kids to play basketball. He said the Civitan Church League  had many Black kids playing in it.

Scottie Heglar later spoke against the park, saying it was more infrastructure.

As he was walking back to his seat, Heglar confronted Misenheimer and was taken out of the meeting by a sheriff’s deputy.

Zina Risley asked the mayor to reopen the meeting and show support for the basketball court, as well as forming a parks and recreation committee.

“I appreciate that offer,” outgoing mayor Terry Deese said. “My offer is still, though, that the next mayor is the one who ultimately is going to be held liable and responsible. That’s where I stand.”

The council took no action on the item at the meeting.