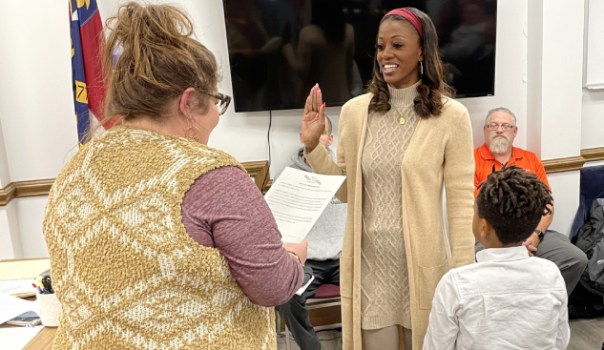 Latoya Jackson is sworn onto the Oakboro Town Commission by the town's new clerk, Leslie Hatley-Murray. (Photo by Charles Curcio/staff) 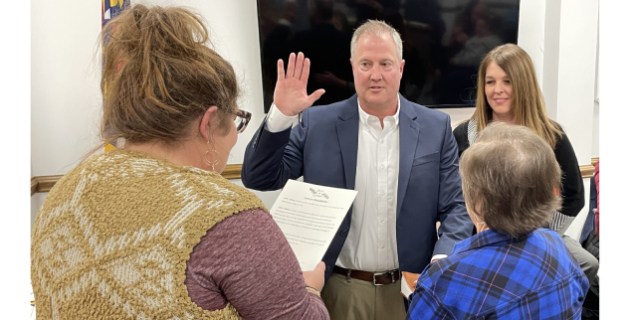 Brett Barbee is sworn onto the Oakboro Town Commission. (Photo by Charles Curcio/staff)

The governing body and working staff of the town of Oakboro swore in its new members at Monday’s meeting of the town commission.

Chris Huneycutt was sworn in as the new town’s mayor after resigning from his seat as board commissioner. Huneycutt won the mayoral race in the general election.

Latoya Jackson and Brett Barbee were sworn in as new town commissioners, with Barbee being named mayor pro tem.

Oakboro’s town commission is short one commissioner now with the departure of Huneycutt, Mike Efird and Bobby Watkins. Huneycutt later said via text the town does not have a specific time frame to fill the open seat.

“I want to fill (the opening) ASAP; however, the board needs to discuss this so we can work together to choose the right person. The appointed person will complete the remaining two years of the four-year term,” Huneycutt said.

Bud Smith, who won reelection in November, was not in attendance at Monday’s meeting. Lanny Hathcock is the town’s other commissioner.

The board also made appointments for the various departments for which commissioners are in charge. Barbee is the new chairman of the budget and finance, along with serving as assistant for the advisory board and code enforcement. Hathcock will be chairman for the police department and the advisory board and code enforcement, along with being the assistant for the streets and cemetery.

The rest of the departments will go to whomever fills the vacant seat on the commission.