‘She makes all the good days better’: With help from VFW, American Legion, Richfield Army veteran cherishes his service dog 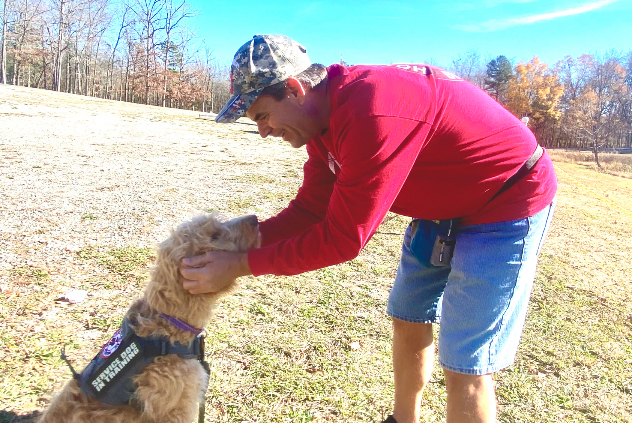 After serving overseas as part of Operation Desert Storm in 1991, during which he was involved in active combat, Terry Lewis struggled to adjust to life as a civilian.

Simple acts like going shopping became difficult, as he would get anxious whenever he was around large crowds, and little things, such as fireworks or other loud noises going off, set him off. His mood also changed and he got depressed and was often angry.

“I always knew that when I came home, that I was not the same person that I was before I went,” he said, noting that things got so bad that at times he “hated the world” and even considered taking his own life. His struggles also played a role in ending his three marriages, he said.

It was not until around 2015 that Lewis, 59, was diagnosed with post-traumatic stress disorder and depression. The news came as a relief, as he was finally able to understand why he had been struggling over the years after his experiences in the Middle East.

About 12 out of every 100 Gulf War veterans have PTSD in a given year, according to the U.S. Department of Veterans Affairs’ National Center for PTSD.

Despite the depths of despair that Lewis has gone through, a great light has come into his world recently in the form of a young goldendoodle named Bella, who he was introduced to in September and is now his service dog.

Bella is, in essence, Lewis’ safety blanket when he is in uncomfortable situations and helps calm him whenever he has panic attacks or nightmares. He has been starting her off slow, only taking her to a few places, such as Lowe’s and his church for Bible study.

“It’s just slowly getting her out because I don’t want to overload her,” said Lewis, a 10-year Army veteran who resides in Richfield.

Bella has also become fast friends with his other dog, Blue. 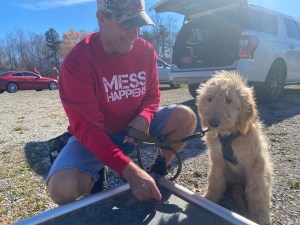 Terry Lewis was first introduced to Bella in September.

He has been receiving basic obedience trainings at Richfield Park every other week from Terri Wilson, founder and owner of Carolina Legacy K9, who paired Lewis with Bella.

She works with Lewis to strengthen his bond with Bella, including teaching him about short marker commands he can say to Bella whenever she completes a task.

Wilson can relate to what Lewis has gone through as she served several months in Afghanistan with the Air Force and utilized a service dog to help alleviate some of her own struggles with PTSD. Wilson’s service dog, who is now retired, is also named Bella.

“With Bella, when he first got her, she was kind of leery about things and shy,” Wilson said, “but now I can see she is really in tune with him and looking at him and paying attention to him.”

“I have seen the bond with them completely take off from day one,” Wilson added. 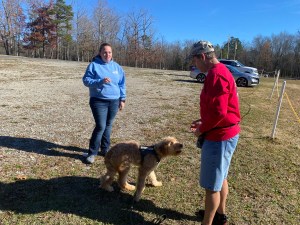 Terri Wilson works with Terry Lewis and his dog Bella at Richfield Park.

Since starting Carolina Legacy at the end of 2020, Wilson has helped about a dozen veterans and first responders in the area get paired with service dogs, including several German shepherds. She is helping to train six veterans with their dogs. The training typically lasts about six months.

Lewis received $1,000 donations from both VFW Post 2908 and American Legion Post 76 to pay for Bella’s training equipment, vaccinated and spayed, after speaking to both groups about the importance of him being partnered with a service dog.

“I’m blessed and grateful to have the support of both organizations,” Lewis said. “Because without them, I wouldn’t have Bella.”

Bill O’Neal, commander of Walter B. Hill American Legion Post 76, appreciates that his organization and the local VFW chapters have the ability to help veterans like Lewis.

“We can make it happen quickly and get them the help they need,” he said.

O’Neal also wanted to help Lewis because after hearing his story, it provided the chance to shed more light on the struggles people go through who have PTSD. 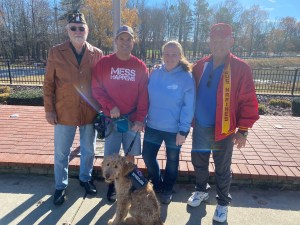 While Lewis is still in the beginning stages of his relationship with Bella, his says his outlook on life has improved and he is happier than he has been in quite some time. As much as she has helped him, there is a great deal of accountability on his part, to make sure she is loved and protected, which he greatly appreciates and which helps to give him purpose.

“For all the bad days that I have, she makes all the good days better,” he said. “She’s the reason why I want to get out of bed.”