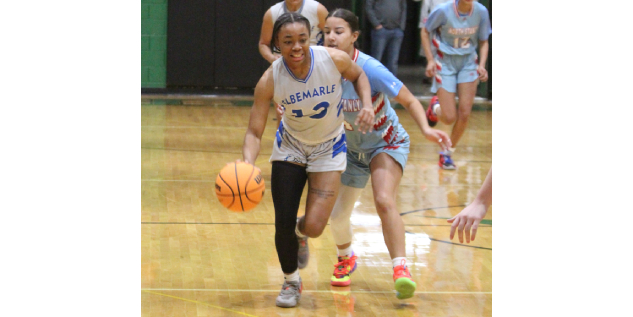 Two teams rated in the Top 10 in their respective classifications and regions met in the last game of the second day of the West Stanly women’s basketball tournament Tuesday night when Albemarle faced North Stanly.

An early 10-0 run for the Bulldogs lifted Albemarle to a 76-45 win over the Comets, ending North’s 11-game win streak to open the season.

Nyleiah White, who played last season with North before transferring, led the Bulldogs with 27 points including five of the team’s six makes from beyond the three-point arc.

Albemarle (8-3) built a 10-2 lead early in the first quarter, including five points from Kai Spencer, before North answered with a 5-0 run. The Bulldogs outscored the Comets 13 to 3 over the final 2:36 of the first period to lead after one, 23-10.

“(Nyleiah) has had a lot of development over the summer,” Albemarle head coach Eric Davis said. “She’s shooting the ball well and scoring from all three levels. She’s really trusting her game now.”

Davis said the team has had improvement all around it, noting last season Albemarle only had its full roster for six games because of injuries.

“You’re seeing the whole roster back together.”

White said working with Coach Davis helped her improve her game, adding, “the amount of time he puts in and the dedication he has for his players, it has opened me up as an all-around player. It was really all the work he made us put in.”

Albemarle will take on Covenant Day for the holiday tournament title Wednesday night at 6. The Lions beat West Stanly in the other semifinal matchup, 54-38.

The Bulldogs and Comets will meet Jan. 6 in the first of two regular-season conference games to be played at Pfeiffer University’s Merner Gym.