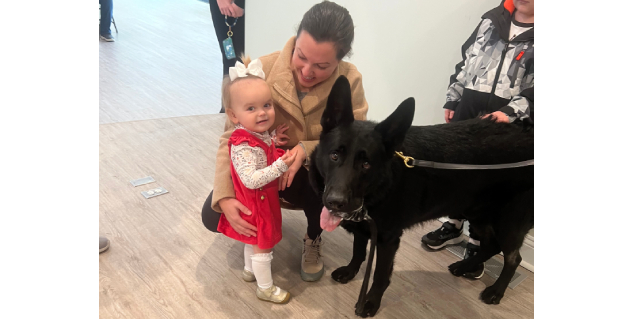 Making Christmas a little easier for families has been a movement for one of the four-legged members of the Oakboro Police Department.

Joker, a community K-9 officer with the department, and handler Sgt. Jason Eschert recently wrapped up his second holiday drive raising money for the Toys for Tots campaign.

The pair raised $7,700 for the local toy drive, of which all the funds stay in the county and go to buy toys for children in the holiday season.

“We were grateful in 2021, and I can say we were truly blessed in 2022,” Eschert said regarding the toy drive funds.

At the December meeting of the Oakboro Town Commission, Joker and Eschert were part of a check presentation for $2,500 from Aftermath to the town’s fund for its canine officers.

Recently, the company, which specializes in crime scene and biohazard cleanup, hosted a contest to award funds to K-9 officers across the country. Joker was one of four dogs nationwide who each won the grand prize of $2,500.

Joker has been out spreading Christmas cheer to the community recently, according to Eschert. He rode with Santa throughout Oakboro, waving to children and taking pictures, and most recently hosted a “Santa Paws” event at Oakboro District Park.

Outgoing Oakboro Mayor Joyce Little signed a proclamation which declared Joker as the Community K-9 of the Year. In the proclamation, Little said Joker “was a valuable member of the Oakboro Police Department.”

Health issues have retired Joker from patrol duty, Little added in the proclamation, but she said Joker would continue to be a community K-9 and would “continue to make his rounds” of visiting schools, in the town and special events, “bringing smiles to children and adults alike.”

Little also said because of his “PAWS-itivity and love for his job,” she issued the proclamation.