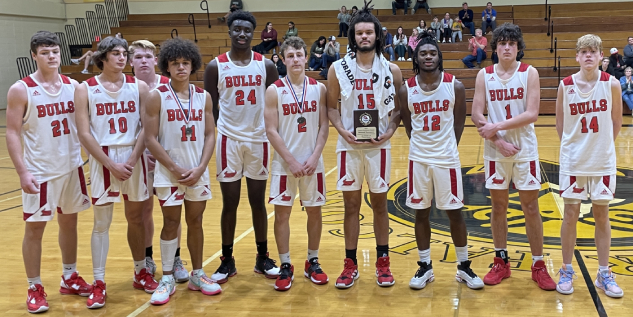 The South Stanly men’s basketball team returned seven players this season, opening this season with a win at West Stanly.

After winning that game, the Bulls entered the 2022 Comets Christmas Classic tournament on a seven-game losing slide. However, South won two out of three games at the tournament and ended up winning the second-place plaque.

In Wednesday’s opening-round game, South had three in double figures in a 61-36 win over the Central Academy Cougars.

Drew Gaddy, a junior who was was All-Conference last season, led the Bulls with 19 points while sophomore Gavyn Miller added 18. Sophomore Cohen Whitley scored 10, all in the first half.

The Bulls then faced North Stanly, who had advanced to the tournament semifinals with a 72-27 win over Gray Stone. The Comets had earned a win earlier in the season over South.

In Thursday’s game, South outscored North in three of the first quarters and advanced to the finals with a 57-48 win.

Gaddy and Miller had 19 points each to lead the Bulls, with Whitley adding 12.

South led by two at halftime and outscored North in the third quarter, 16-9, en route to the win.

The Bulls then had the tough task of facing the 1A state runners-up in Chatham Charter, who went 33-2 and lost to Hayesville in the finals last season.

South fell to 3-8 overall in a 55-19 loss to the Knights. Gaddy led the Bulls with six points.

Gaddy and Miller were both named to the All-Tournament team.