North Stanly moves to 13-1 with close win over Albemarle 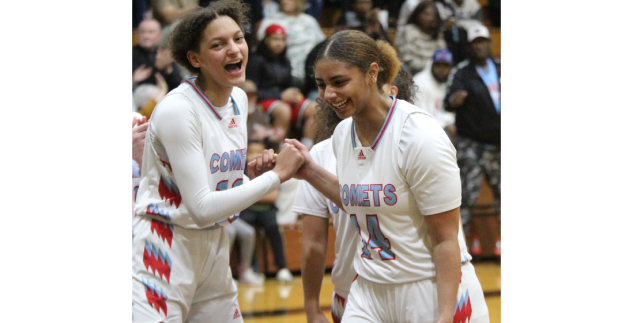 Shalyn Bell (left) and Paris Bennett are all smiles after Bennett made a shot and drew a foul in Friday's game. (Photo by Charles Curcio/staff)

The first time the women’s basketball teams of Albemarle and North Stanly met, the Bulldogs won by 31 points on Dec. 27 at the West Stanly holiday tournament.

North was short a few players that night but had its full complement Friday as both teams took to the floor at Merner Gym on the Pfeiffer campus.

It went down to the wire and Albemarle had a chance to win at the buzzer, but the Comets survived with a 45-44 win.

After battling to a tie in the first half, Albemarle built a five-point lead, 34-29, with 2:21 left in the third before the Comets went on a 6-0 run in the final 30 seconds, getting a three-point play from Bennett and a 3-pointer from Karlye Stamper in the final 10 seconds.

Albemarle rallied back to take a lead in the fourth quarter and the lead changed hands several times in the final minutes. Baldwin’s three from the corner with 2:32 left put the Dogs up 44-43.

In the last minute, Bennett got the steal when Albemarle tried to get the ball in the low post. She later passed to a teammate who missed, but Bennett’s offensive rebound and stick back with 32.7 seconds left put them ahead 45-44.

The Bulldogs pressed and got the ball back with 5.9 seconds left. After a timeout, Baldwin got the inbounding pass and drove to the basket, but her layup attempt rimmed off the back of the iron in the final second. Albemarle could not get another shot off, giving North the win.

“In the tournament, we got our feelings hurt, whether it was the players or not,” North head coach Regan Allen-Perry said. “We came with the mentality tonight that we were not going to let that happen again. I’m glad we got beat the first time the way that we did. If we hadn’t, we wouldn’t have played tonight the way we did.”

Allen-Perry added her players “worked extremely hard in practice this week to be ready for this game. They were mentally tough and I could not be more proud of them.

“So many people doubted us at the start of the season, saying Albemarle was going to come in and sweep everybody,” she added. “We showed them they were not going to do it.”

North point guard Gia Dunlap said the loss by that much earlier to Albemarle was motivation.

“We had to come together as a team and improve the little things,” she said. “We played our game and did not speed up when necessary, boxing out, little stuff like that.”

Bennett agreed, saying, “There were a lot of people downing us…but we came out tonight with good energy.”

Freshman Lexie Brown, who scored six in the win for North, said the team “had their heads up but we were down on ourselves a little bit” about the loss. However, she added, “we came in (tonight) knowing we could do better.”

Brown also credited Dunlap’s efforts, saying, “she brings a lot of motivation to the team. She is a leader, so we needed her…when she plays, she makes good passes to the big men and smart plays.”

North, currently ranked 13th in the 2A West, travels to Mount Pleasant (4-10) Tuesday.

Albemarle, ranked fourth in the 1A West, travels to Union Academy Monday.