Many of Stanly’s best football players have been part of the Shrine Bowl of the Carolinas, the U.S. Army All American Bowl and the NCCA East-West game.

However, one West Stanly youth football player recently played in a statewide all-star football event, the 2022 Youth Shrine Bowl of the Carolinas in Greenville, South Carolina.

In fact, for Caleb Foley, a seventh grader at West Stanly Middle, being part of the Shrine Bowl program is a family tradition. 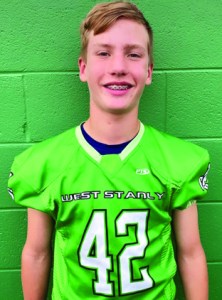 Foley attended a scouting combine and earned a spot on the team at defense. For West Middle, he plays defensive end and linebacker, while also playing on the Colts’ offense at tight end.

His attendance to the combine, which also took his good grades into account, was helped by Warren Jackson, defensive coordinator of the West Stanly High School’s football team. Jackson, also one of the West youth football coaches, informed Foley’s family of the opportunity to play in an NFL-type combine.

Foley then was required to raise a minimum of $1,500 for the Shriners Children’s Hospital in order to participate. Foley did just that, raising more than $3,000 from friends and family by doing a video on his mother’s Facebook page.

He also had letters of recommendation from Jackson and Kristen Herlocker, who teaches sixth grade at West Middle.

Tyler Lewis, his uncle, was one of the standout players of the Albemarle Bulldogs state championship teams from 2001 to 2003. He played in the 2003 Shrine Bowl.

Foley was also named as the Outstanding Student-Athlete of the North Carolina team. A copy of his report card was displayed during practice all week.