A mission to help revitalize the alleyway beside the old Davis Drug building on West Main Street, which Albemarle first acquired from the county in 2019, was placed in the spotlight again during Monday’s city council meeting.

The alleyway, which stretches from West Main Street to King Street, will become a pedestrian plaza with seating for outdoor dining and casual gathering. It will include overhead string lighting and decorative poles and green space, including planters that can be adjusted for the seasons. During a council meeting in June 2021, other amenities that were discussed included artificial turf with cornhole boards and a giant, brightly-colored mural on the side of one of the buildings.

The landscape architect McAdams has provided a sketch design that was used to set the direction of the alleyway design. 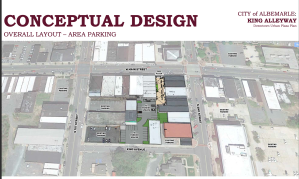 Above is a rendering of what the alleyway project could look like.

When the project was first put out to bid, NJR Group, a construction company based in New London, was the lowest bid at $837,595, though it was over the estimated project budget. Council decided that city staff would supplement work on the project to lower the cost, but once American Rescue Plan Act (ARPA) funds became available, the council pivoted and decided to fully fund the project.

Now that council has approved ARPA funds to help with the project, a few things still have to happen, according to public works director Ross Holshouser. A budget amendment needs to be made to the project budget (which initially did not account for ARPA funds) and presented before council for approval; council needs to formally award the bid to NJR; and council needs to approve the contract.

“Our hope is (all this can be accomplished) by the first meeting in February,” Holshouser told council. Once all of that is completed, the city can look into when construction should begin.

Albemarle Assistant City Manager Darren Rhodes told Council that assuming there is good weather and no setbacks, whenever construction does begin it should take about six months to complete.

City Manager Michael Ferris previously said the alleyway could become a “pocket park within the downtown.”