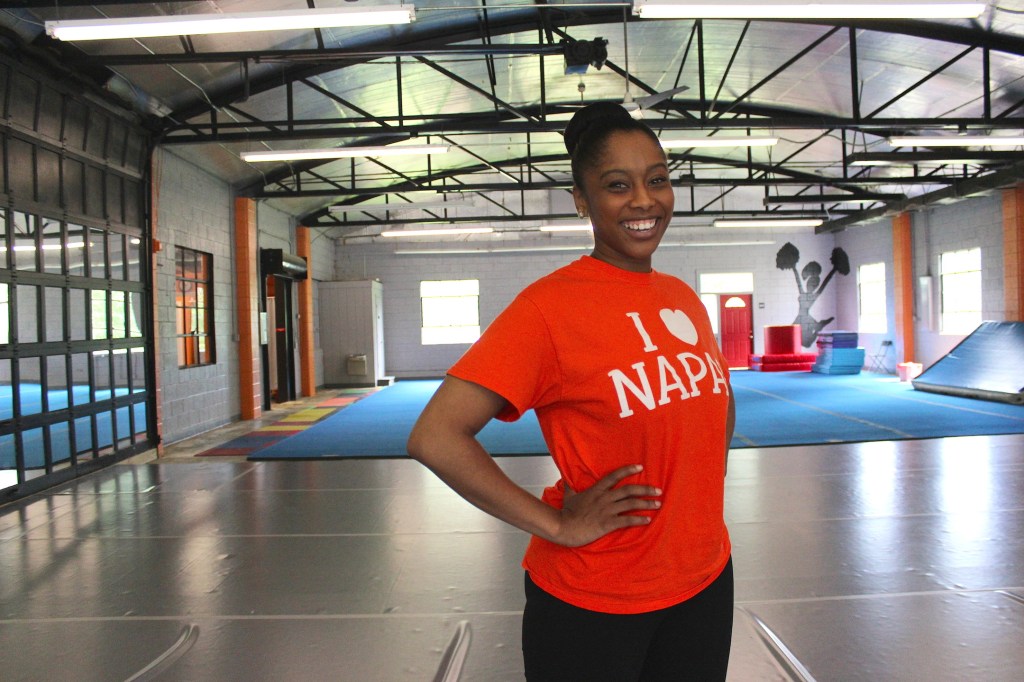 Erika Hogan never says never anymore. It’s a surprisingly sour little word, and she’s had to swallow it too many times.

“Particularly with this business,” Hogan said.

The latter studio recently tripled in size when she relocated to the former Pro-Fit Gym building on N.C. Highway 24-27 this spring.

“But there are so many reasons why it never should have happened,” Hogan said.

The first of those “nevers” reared its head in college.

Despite Hogan’s passion for dance, people constantly told her she’d never make a living of it. So when she got into Winthrop University, she enrolled in pediatric studies instead.

However, after helping teach dance for a while, she couldn’t shake that her passion for it. So one day she suddenly asked herself, “Why not?” She could prove that big, fat never wrong.

Working six jobs for a time, she saved up enough money to open her first studio when she was still in graduate school. The tiny two-room office in Rock Hill barely had enough room for classes, but she made it work.

Not long after she graduated, she expanded into another space. And then another. Soon she was hiring friends from  Winthrop to teach new classes in gymnastics and cheer and acrobatics.

About seven years later, another never sprung itself on her.

At that time, a dance studio owner in Locust was getting ready to retire. Unwilling to leave her kids without a place to continue lessons, the owner approached Hogan about purchasing her business.

“She’d seen what we were doing in Rock Hill and really liked it,” Hogan said.

However, Locust is about two hours from Rock Hill. And Hogan wasn’t sure if she was ready to take on a second location.

“I never thought it would work,” Hogan said.

But even as she thought the word ‘never,’ Hogan got a call from the retiring studio owner.

“She told me ‘just come down and teach a couple classes,’ ” Hogan said.

So to be fair, Hogan agreed. By the end of her first class, the kids were hugging her and asking her to come back and see them.

And with that, all of Hogan’s nevers flew out the door.

“I fell in love with them,” Hogan said. “Those kids were everything you could hope for. I started thinking it could work.”

After a few more visits, she made an agreement with the studio owner and refitted the space. By the end of the year, the studio’s enrollment doubled.

“I cannot tell you what it’s done for my heart, working with these kids,” Hogan said. “They amaze me everyday… I’m forever grateful we took that step.”

Even so, she never anticipated what happened this year.

Several months back,  another offer came Hogan’s way. The owners of the Pro-Fit Gym property were looking for a new tenant and wanted to offer the site to New Attitude.

“They thought it might be a good fit for us,” Hogan said.

And Hogan could certainly see why.

After being cramped in an office space in Locust Town Center, the new facility had the feel of a palace. Plenty of room for dancers and gymnasts and acrobatics, even if they all wanted to practice at the same time.

In fact, it was almost too much room.

“There’s no way to fill it with the students we have,” Hogan said, noting that they have about 60 in Locust right now.

But Hogan knew better than to say never. After looking over her finances, she brought over some of the moms to look at the property.

With that encouragement, Hogan decided to go for it. While she developed more classes for the expanded space, the moms and students vacuumed and scrubbed and painted every inch of it.

“All the murals on the wall, they did that,” Hogan said. “They went beyond anything I could have asked. They made this possible.”

To fill out the space, she’ll expand both staff and classes at the Locust studio this summer, too. Along with more of their regular classes, they’ll open a cheer program, a music/theater program and possibly a martial arts program in the next few weeks.

But perhaps the most important ‘never’ that Hogan seeks to tackle is the one kids tell themselves.

No matter how skilled a student is, there’s always something they think they can’t do, she noted, whether that’s a particular tumble or a difficult dance move.

“A big part of what we do is about telling kids they can,” Hogan said.

And that goes for off the dance floor, too.

In order to help their students with the challenges and struggles of school, New Attitude partners with local teachers to provide tutoring at the studio.

Other times, Hogan and her teachers will go to the schools themselves to have lunch with someone who is struggling in class. Or post a student’s accomplishment on their “wall of fame” at the studio.

And while they do have competition teams, Hogan prefers to emphasize group activities and camps so that families can be more involved.

“We want to train the whole person, not just dancers,” Hogan said.

After all, she knows that “nevers” don’t restrain themselves to the dance floor.

And successes don’t have to either.

“I hope they always hold on to that,” Hogan said.