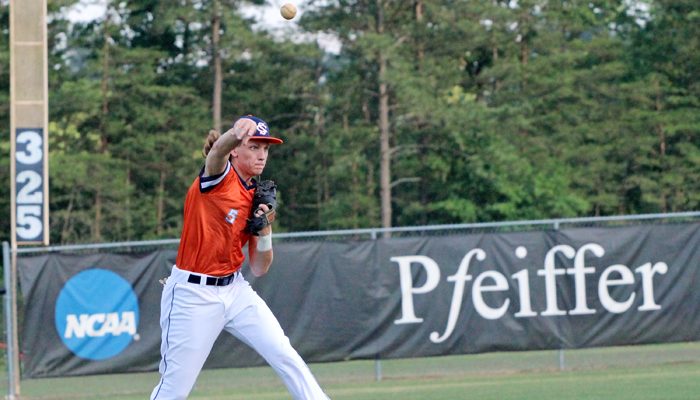 Stanly County Post 76 American Legion baseball has a new home field in 2019 which has met with positive reviews and lingering concerns as the season unfolds.

Because of damage from storms last year to Don Montgomery Park in Albemarle, the baseball program moved its home games this season to Pfeiffer University.

Stanly opened its home schedule on Monday night with an 7-4 win over Randolph County followed by a 3-2 win over Eastern Randolph the next night.

Around 85 fans, many in lawn chairs sitting on the road leading down to the baseball fan, were in attendance of the team’s home opener, including first baseman Colton Austin’s mother, Amy Austin.

“The field quality is a whole lot better here. There were some concerns in the outfield, balls taking bad hops,” Amy Austin said referring to Don Montgomery Park.

“The only problem I think is it’s not as centrally located for most of the boys in the area.”

Playing at Pfeiffer will be good for the players, she added, saying “they get the full feel of a college field and hopefully maybe a little more visibility for college scouts to take a look at them.”

Another parent, Jeff Kidd, said the exposure of more people coming to Ferebee Field could work for Pfeiffer as well.

Kidd, whose son Cody will play for Pfeiffer next season, said it’s good for players who “may or may not ever get to (play on a college field).

Stanly head coach Jordan Sells said the aspect of being able to play on a college field “has done a lot for our guys early this season.” He added the players have been more engaged in the game “which is what we were hoping for when you play three, four or five games a week. (The staff wanted to) give them somewhere easy to show up.”

Sells and others on the coaching staff had asked some of the players from further away like Anson and Piedmont about playing at Pfeiffer, with the extra travel involved for players to get to Ferebee Field.

“They wanted to play there…this option seemed the best one for our program. You get a real baseball atmosphere; it’s easy on the eyes. Fans and parents want to come out and watch something that looks pretty,” Sells said.

Travel out to Misenheimer is something the coaching staff is working out, Sells said. Currently, some players are picked up at Don Montgomery Park by coaches and taken to the field while others carpool from Oakboro.

The coach said the team is in an “adjustment period” when it comes to that aspect, but he believes the efforts are worth it.

Cal Massingale, Post 76 commander, said he is looking at the situation with an open mind. He noted the field is better and the team has responded, having won three of four games so far.

“Due to the lack of being able to have normal concessions, we’re not making the money we could have made,” Massingale said.

He said attendance was a concern but said the numbers at the first two games “were comparable” to what the team was drawing.

The biggest group of traveling fans, Rowan County, will be a big test for playing at Pfeiffer, Massingale said. Post 76 hosts Rowan May 30 in a non-league game and a league game June 19.

Plans are currently underway for Post 76 to host a “Joe Ferebee Night” at the June game. The 99-year old legendary coach for whom the field at Pfeiffer is named coached the Rowan Legion program for a number of seasons as well as having spent time coaching at Pfeiffer.

“Until we try it and see, I’m not sure,” Massingale said about Joe Ferebee night and other potential promotions.

“I hope that will be the case; we’ll give it a chance and see what happens,” he added, referring to additional promotions.

Massingale said through the first two games the “only downside so far as been not doing the amount of money we would have made in concessions.”

Post 76 will be back at home Friday against Mooresville.