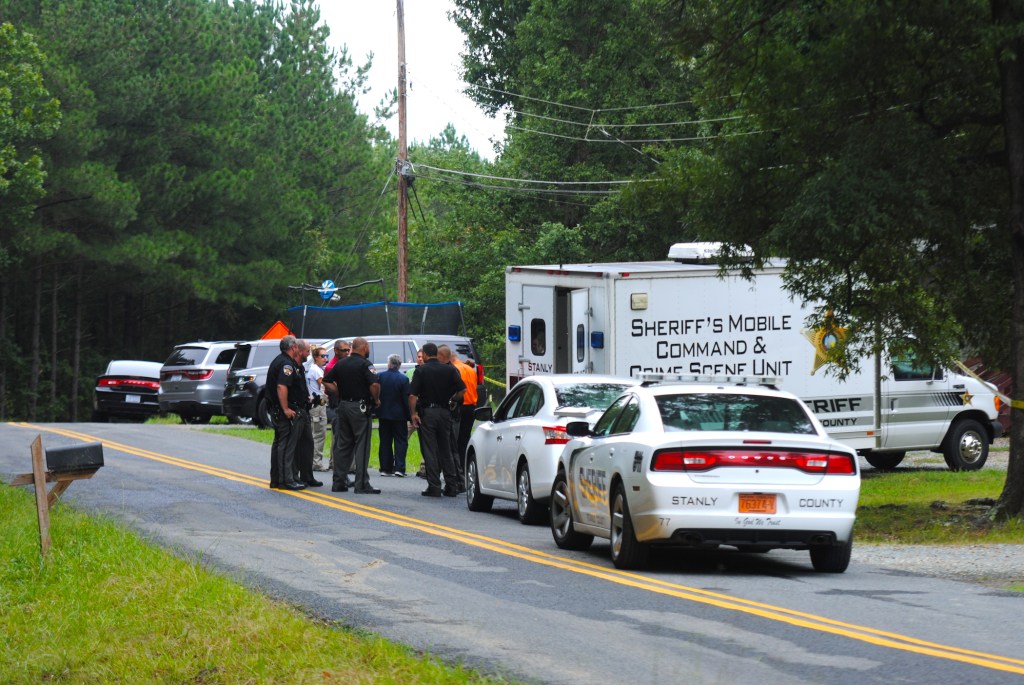 An investigative team gathers outside a group of three houses on Shady Rest Road. One of the houses was the site of a double homicide this morning.

Two are dead and one injured following a shooting in the Badin area.

The incident took place sometime between 8:30-8:45 a.m. Monday on Shady Rest Road, a street off N.C. Highway 740 between Badin and New London.

“We have two deceased, one male, one female,” said Brian Hatley, captain over investigations for the Stanly County Sheriff’s Office. “(The third victim) is in stable condition.”

No names have been officially released by law enforcement.

“We do have a suspect,” Hatley said. “We are securing a warrant for his arrest… As of about (11 a.m.) we know he was in the Albemarle area.”

None of the neighbors were sure what led to the shooting.

As for how it happened, it appears all three victims were at the same house at the time of the incident, according to neighbors.

“I heard five or six gunshots, but didn’t pay it any mind,” said Nathan Harris-Bey, who lives next to where the shooting happened. “People shoot off guns around here all the time.”

However, a few minutes later he heard a banging at his door. When he went to go answer it, his neighbor was there.

“He was standing on my porch, been shot five times, then drug himself all the way over there,” Harris-Bey said.

“I went in to the house and got stuff,” Harris-Bey said. “Towels, shirts, anything I could grab and to wrap it up tight. Then I stayed with him till they came.”

As they were sitting there, the man told Harris-Bey a cousin had shot him, and then begged someone to go check on his girlfriend, who had been shot at the house.

“I told him, no, I’m going to stay here and take care of you,” Harris-Bey said. “I don’t know what’s going on over there.”

When police arrived, the shooter was gone. The man was taken to the hospital and officials  roped off three houses along the road.

All three had blood on their porches, neighbors said.

“(The injured victim) tried to go over to the other neighbor’s place before he came over to mine,” Harris-Bey explained.

Christina Braley, who lives at the third house roped off, came home from work when she found out what had happened.

“I wanted to get here before my son got back from school, make sure he doesn’t see this,” she said.

The Sheriff’s Office will release further information as it becomes available.