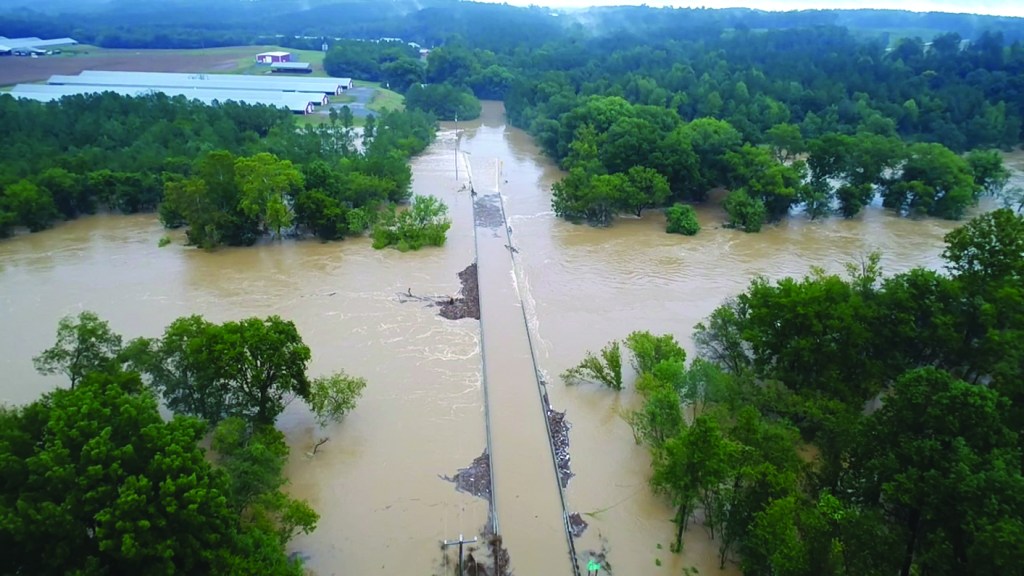 A view of Rocky River Bridge Monday morning on Plank Road between Stanly and Anson counties after flood waters cover the structure from rains coming from Hurricane Florence. (Photy by Jerrod Coley)

The southern communities around Norwood, Oakboro and Stanfield experienced the most dramatic of those effects as rain and runoff raised the Rocky River and its tributaries dozens of feet in a matter of hours. 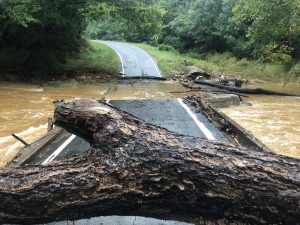 This infamous bridge on on Booger Hollar Road was partially washed away during Hurricane Florence.

Perhaps the most notable of those was a bridge on Booger Hollar Road. Fully submerged during the deluge,

the bridge was partially washed away by the current. Its remaining surface was cracked and a tree  later crashed atop it as well. 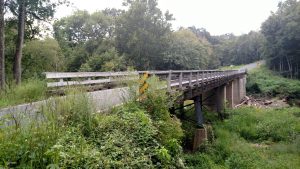 A bridge over Little Creek on Bethlehem Church Road was also flooded for several hours. Caught in the torrent, a section of metal railing came off, washed 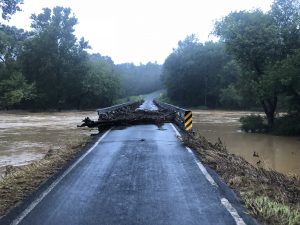 The Bethlehem Church Road bridge on the Monday after Hurricane Florence.

downstream and lodged against another bridge on N.C. Highway 138.

“As of (Monday afternoon), the Low Water Bridge on Hills-Ford Road was still submerged as well,” Smith added. 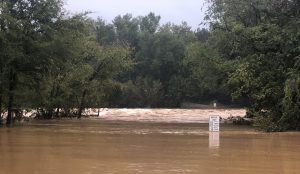 High water continues to run over the Low Water Bridge the Monday after Hurricane Florence.

Just below Norwood, the Rocky River also came within two or three feet of swamping a bridge on U.S. Highway 52, officials there added.

“We were afraid it would go across, but it stopped just short of that,” Norwood Town Administrator John Mullis said. 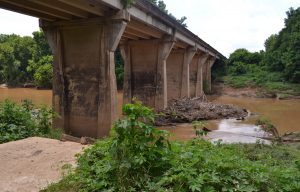 U.S. Highway 52 over the Rocky River before Hurricane Florence. 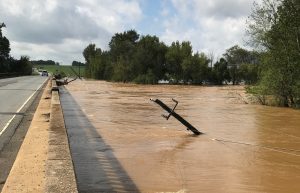 Hwy. 52 over the Rocky River the Monday after Hurricane Florence.

Still, the onslaught took out a power pole along the riverbank and likely a kayak launch below the bridge (though it was impossible to tell since the structure was yards below the surface).

A sinkhole also took out a road near Stanfield.

And while the southern communities saw some of the most dramatic water level changes, they weren’t the only ones whose roads were submerged.

Albemarle shut down several roads over the course of the storm — including a nearly four- mile stretch of U.S. Highway 52 — when waterways spilled over their banks.

“The worst of it was on Sunday,” Albemarle City Manager Michael Ferris said.

During that time, water  scoured away pavement at an intersection of Summit Avenue and Davis Street, and poured not only across Highway 52, but into nearby commercial sites including Uwharrie Commons and Family Video at Salisbury Avenue.

“We had people working 24-7 to clear drains and remove debris,” Ferris said. “But no system is built to handle that much water.”

In fact, nearly every city and town reported some kind of sewer overflow issue during the storm.

“Our systems are working around the clock,” Locust Town Administrator Cesar Correa said.

The town of Norwood also reported a discharge of about 2,000 gallons of untreated wastewater from its sewer plant on Highway 52.

“The gravity sewer line carrying the wastewater exceeded its capacity due to area flooding from Hurricane Florence and therefore flowed into Little Cedar Creek which is in the Yadkin-Pee Dee River Basin,” a report to the  N.C. Department of Environmental Quality read.

The municipalities of Richfield, Misenheimer and Locust reported only minor power outages lasting a half hour or less.

“We were very lucky in that area,” Oakboro’s T.J. Smith said. “We only had a few small trees come down, so nothing went out for long.”

The city of Albemarle  was not so fortunate. By Sunday afternoon, a number of large downed trees led to numerous power outages, some lasting more than 10 hours.

“When the storm really picked up on Sunday, there was a lot more than we could handle at once,” Ferris said.

And with waters rising, some of the issues were physically impossible to get to, he added. Still, utility crews worked through the night to restore power. Administrative staff stayed as well to help communication.

And by Monday morning, only 25 houses were still without power.

“They should all be back up by the end of the day,” Ferris said.

As for other damage, most municipalities experienced problems at their parks.

Both Richfield and Tyson Park were flooded at the north end of the county. Darrell Almond Park in Norwood was closed due to flooding at the southern end. And Albemarle closed all of its parks, noting particular damage to Rock Creek and Don Montgomery Park.

“After everything else is straightened out, we’ll turn our focus there,” Ferris said.