More than 125 teams traveled to McAlpine Park in Charlotte on Sept. 22 for the Hare and Hounds Cross Country Invitational.

The excitement of racing was overshadowed by a rare tragedy. During the women’s invitational race, Union Pines runner Samantha Davis collapsed with a seizure before going into cardiac arrest. The medical team on site rushed to Davis before she was transported to Novant Presbyterian Medical Center. The 17-year old runner passed away shortly after midnight.

Cross-country teams across the state tend to be close due to the nature of the sport, with teams competing against each other in weekend invitationals. The teams set up tents next to each other during the long Saturday meets with plenty of time to socialize and build relationships.

While the top seven men and women Colts had completed their races at the time of the tragedy, the rest of the Colts were yet to start. After a team prayer for Davis, the Colt coaches, runners and parents decided not to race anymore that day and return home. 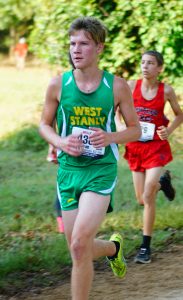 Nathan Brown finished the course last Saturday at the Hare and Hound 5K in 20:27 for West Stanly. (Photo by Johnny McManus)

The Hare and Hounds meet has become one of the largest cross-country invitationals during the season. More than 1,000 men and 1,000 women from five states descended on McAlpine Park for this eighth edition of the Hare and Hounds 5K.

The Colt men were up first with freshman James Shue being the fastest Colt of the day for the second time in five meets this season. Shue ran even splits for 133rd place out of 535 finishers and a personal record 18:45 time.

The Colts have a second freshman continuing to improve with Blayne Morton running his second-best time of 21:18. Daniel Brattain rounded out the Colt top seven running 21:34. The Colt men finished 38th out of 74 teams, with West Forsyth taking the team honors.

The temperatures continued to heat up as the Colt top seven women headed to the starting line.

Senior Pierson McManus and freshman Natalie Almond continued to shine for the Colts. McManus ran strong throughout the race, finishing a 33rd out of 399 finishers. Her time of 21:16 was her second-best time of the season. Almond continued to run consistent while racing to a 21:39 time for 44th place.

Senior Maddie Miller ran even splits through the heat, while moving up a spot on the team. Miller ran 23:49 to finish 153rd.

Brooklyn Simpson was bit off her early season success with the heat taking a toll. The senior held on to finish 195th in 24:22.

The Colt women finished 21st out of 53 teams, with West Forsyth women matching their men by winning the team title.