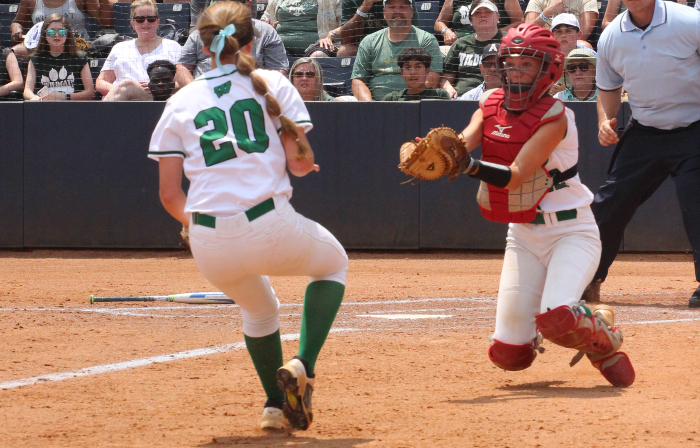 West Stanly catcher Rosalyn McRae makes a diving catch in the opening game of the 2019 2A State Finals Series. (Photo by Charles Curcio)

After rains forced the opening game of the 2019 2A State Finals Series to Saturday afternoon, a pitchers duel opened the series between two sophomore southpaw standouts in the circle.

West Stanly’s Jordan Hatch outfought her counterpart, Eastern Randolph’s Savannah Beaver, for nine innings until the Colts’ offense came through in the bottom of the ninth for a 1-0 walk off win.

Morgan Edwards led off the ninth taking the first pitch into center field for a double on the first pitch of her final at-bat of the game, saying she was advised by head coach Craig Carter “to take a hack at one and try to get your barrel on it.”

Edwards reached third on a groundout then plated the only run of the game when Shelby Barbee sent a hard grounder which just bounded under the glove of Wildcats shortstop Brooklyn Rush.

“Honestly, I was trying to make contact and put the ball on the right side,” Barbee said about the RBI, her team-leading 41st RBI of the season.

Watching Barbee’s hit, Edwards said as soon as Barbee hit the ball “it was going to be in the hole and hard for the girl to get it. As soon as I saw it bounce off her glove I knew I had to get in.”

The one run was all Hatch needed as she threw 117 pitches in the complete-game shutout win, scattering six hits with one walk, two hit batters and three strikeouts for West (27-1).

“I had to adjust for a good-hitting team. I had to make pitches that worked best,” Hatch said.

Beaver allowed the one earned run on five hits with no walks and six strikeouts taking the loss for Eastern Randolph (24-6).

Eastern Randolph left 10 runners on base in the game including six in scoring position.

West avoided early trouble in the first two innings. Two one-out hits by the Wildcats did not score in the top of the first thanks to a fielder’s choice at third base then a strikeout. Eastern Randolph loaded the bases in the second inning but a diving catch by West catcher Rosalyn McRae in foul territory ended the threat.

McRae led off the second with a single but the Colts could not advance her further. West was then had the next 13 batters set down in a row before Meredith Harwood singled in the sixth.

Eastern Randolph again got two runners on base and moved them to second and third in the top of the sixth but the final batter flied out to Jordan Johnson in right field for the final out.

“(Eastern Randolph) was trying to shorten up a lot throughout the game and punch the ball. We adapted; they got a few hits but we didn’t panic,” Coach Carter said on the win.

He added his team were a little bit down in the first three innings energy-wise but after that span “they started realizing, ‘Hey. We are here. We came to play; let’s finish it.”

The two teams play tonight at 8 p.m. in the second game with the Wildcats playing as the home team in the third-base dugout.