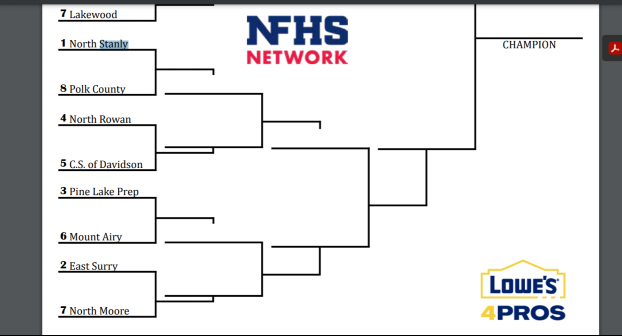 North Stanly is the No. 1 seed in the 1AA Western Region in the preliminary brackets released today for the upcoming high school football playoffs.

(Sports Editor’s Update: North Stanly will not be playing in the playoffs this season after information Monday afternoon from Stanly County Schools confirmed the team will be in COVID-19 quarantine. Here is the link to the updated story: https://www.thesnaponline.com/2021/04/12/north-stanly-football-will-not-play-in-postseason/)

The North Carolina High School Athletic Association has released brackets for the upcoming football playoffs, with one Stanly team qualifying for the postseason.

The North Stanly Comets, coming off the team’s first undefeated season in its 59-year history, is a No. 1 seed in the Western Region of the 1AA playoffs and hosts No. 8 Polk County in the first round.

Coming from Columbus, the Wolverines were 4-1 overall and 3-0 in the Western Highlands 1A/2A Conference, winners of the conference title. Polk’s last game was March 26 when the Wolverines won over Avery County 42-20.

Another team from the Yadkin Valley Conference making the postseason was the North Rowan Cavaliers, who finished second in the YVC. The Cavaliers get the second of the two guaranteed bids for the YVC and are a No. 4 seed in the Western Region, hosting No. 5 Community School of Davidson.

The winner between the Comets/Wolverines and the Cavaliers/Spartans matchups will play in the second round of the playoffs. This season, the tournaments are shortened to include 16 teams per subdivision.

North Moore, another YVC team which North Stanly won two games against this season, is the No. 7 seed and plays at No. 2 East Surry. (Sports Editor’s Note: This paragraph was added as a correction to a previous version of the story to include the Mustangs qualifying for the playoffs.)