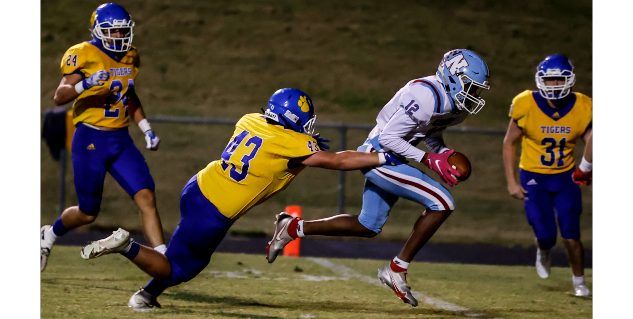 The last time the Comets topped the Tigers on the gridiron was in the previous century, when North won 49-7 over Mount in 1998.

Facing the Tigers for the first time in nine years, North ended a 13-game losing streak to Mount Pleasant with a 21-18 road win.

North Stanly (4-4, 3-1 YVC) built a three-touchdown lead starting in the opening quarter when quarterback Luke Shaver found Stefan Harris wide open in the middle of the field for a 10-yard touchdown pass. Mac Barfield’s extra point put the Comets up 7-0 with 8:31 left in the first quarter.

The Comets added to the lead in the second quarter when Shaver connected with Gavyn Covington for a 31-yard touchdown pass. Barfield’s PAT made it 14-0 Comets.

North led by the same score at halftime and scored what proved to be a critical touchdown in the third quarter. Shaver completed a 33-yard TD pass to Clay Hatley with 7:36 left in the period to go up 21-0.

Mount Pleasant (6-3, 3-1) was not ready to give up. The Tigers staged a late comeback, which started with a 7-yard TD run from Jakob Craver with 35 seconds left in the third. The conversion failed, leaving the Tigers trailing 21-6.

Two minutes later, the Tigers stopped North’s offense and forced a punt. Mount blocked the punt and returned it for a touchdown. However, a bad snap on the point after attempt kept North ahead 21-18.

The North defense came up with a big play when the Tigers took over at the Mount 29 with just under two minutes to play. A halfback pass found its way into Harris’ hands for the fifth of five turnovers the Comets forced in the game, three picks and two fumbles.

With the win, North moves into second place overall in the YVC standings and second behind Robinson for the 2A playoff spot. The Comets host Albemarle (2-6, 2-2) Friday night.

Before this season, Robinson had only played one other Stanly team, beating West Stanly in 2016 and 2017..

Friday night saw the maroon-clad Bulldogs finish a series of first-time games against the three other high school football programs in the county by traveling to South Stanly.

The Bulls fell to 1-7 overall and 0-4 in the YVC, suffering the team’s fourth straight loss.

After scoring twice in the third quarter and starting a running clock, South Stanly spoiled the shutout bid. Taewon Morris took the ball over the goal line from one yard out in the last minutes of the game.

The Colts had not faced Monroe in a Rocky River Conference game since the 2016 season until Friday’s game in Red Cross.

West suffered the team’s second shutout loss of the year in Friday’s loss to the RedHawks (5-1, 3-0 RRC).

Monroe’s win over West was the team’s 12th win in a row and improved the RedHawks’ lead in the overall series with the Colts to 35-7 lifetime.