All the campers at the annual BJ Hill Football Camp post for a photo. (Photo by Charles Curcio/staff) 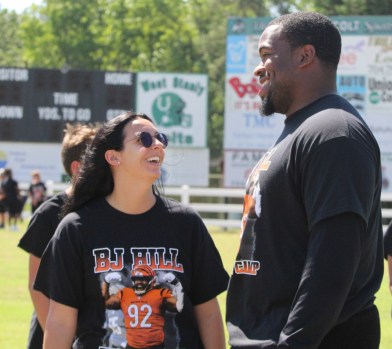 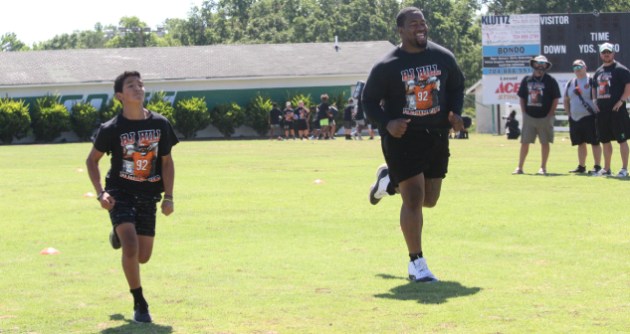 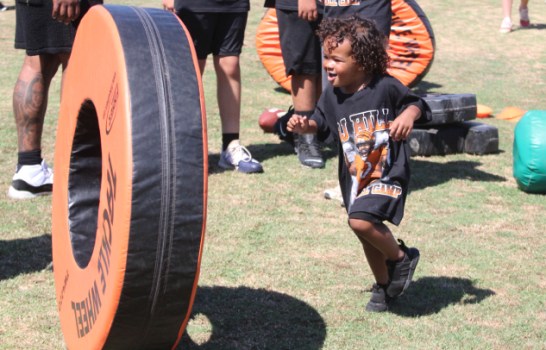 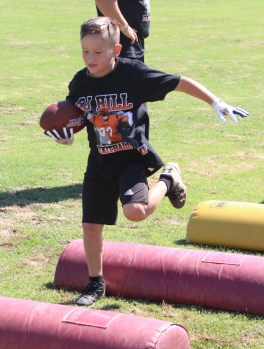 Ryder Soley displays good footwork in avoiding the pads on the ground in a running back drill at Saturday's B.J. Hill Football Camp. (Photo by Charles Curcio/staff)

B.J. Hill is all smiles while tackling the tackle wheel in a drill at his football camp Saturday. (Photo by Charles Curcio/staff)

In just his third season as a professional football player, B.J. Hill came closer than many players in achieving his dream of winning a Super Bowl.

As a member of the AFC Champion Cincinnati Bengals, Hill made key contributions to the Bengals’ success in the 2021 season, including an interception of Kansas City quarterback Patrick Mahomes in the AFC Championship Game.

Hill continued to give back to Oakboro and the surrounding area last weekend with a free football camp at West Stanly High School. More than 150 kids in kindergarten through eighth grade participated.

Attendees learned football skills and competed against each other in games to win autographed memorabilia from Hill, who ran alongside and worked with many of the kids at the camp.

After campers and their families enjoyed a hot dog lunch, Hill met with each of them as they left to sign autographs and take pictures.

“I just love to come back and show people (who) gave so much to me. They gave me so much energy throughout the season. It helped so much, so I have to give back every year. That’s my goal,” Hill said.

He could not have the camp every year because of COVID, but said he wants to do this each and every year “to give (kids) hope that they can do anything they want to do.”

Hill also recently hosted friends, family and fans for free ice cream at the Cup and Cone in Oakboro.

Regarding the upcoming NFL season, Hill said he was excited for the future.

“I’m glad I’m part of the future and I’m ready to get started.”

West Stanly head football coach Brett Morton, one of several West coaches who helped with the camp, said Hill “is one of a kind. He’s a great guy. It means the world to be able to reach out to him. Wanting to do the youth camp here, and having the kids involved, it’s a good time for everybody.”

“You’re not going to find a better role model for your son or daughter than him.”