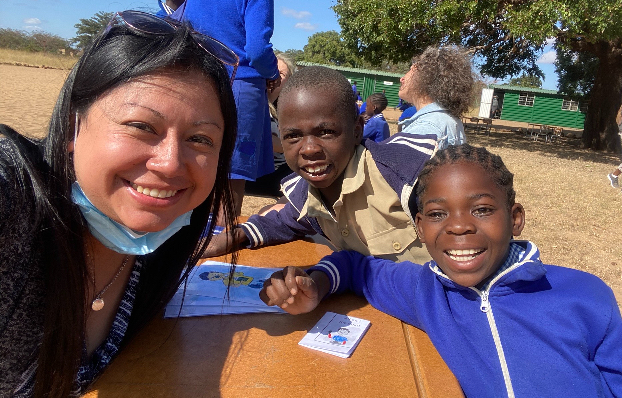 Karol Garcia interacts with kids from the Jabulani Primary School during her two-week trip to Zimbabwe. Photo courtesy of Karol Garcia.

In January, Endy Elementary School kindergarten teacher Karol Garcia received a special invitation. As Stanly County Schools’ 2020-2021 Teacher of the Year, she had the opportunity to travel to Zimbabwe, in Southeast Africa, to learn about the country’s culture, visit schools and spend time serving as a co-teacher.

“I couldn’t even believe what I was hearing,” Garcia said.

As part of the Go Global NC’s Global Teachers program, 42 educators from across North Carolina — including Karen Brown, the career development coordinator at West and South Stanly high schools — traveled to Zimbabwe for 15 days in June. Teachers from Stanly in recent years have also traveled to China and Mexico with the program.

After a four-hour Zoom session and a one-day orientation in Raleigh, where teachers were briefed on what to expect and learned background information about the country, Garcia and the other educators left for Africa June 17. They arrived in Johannesburg, South Africa, the next day and finally reached Bulawayo, Zimbabwe’s second largest city, on June 19.

Garcia was not aware anyone else from Stanly was going on the trip until she met Brown, a finalist for teacher of the year during the 2019-2020 school year, for the first time on the airplane out of Charlotte.

“She was sitting right next to me…and she asked me where I lived and I said ‘Well, I live in Albemarle,’ and she said ‘Oh, I do, too,’ ” Garcia recalled.

When she learned Garcia was a teacher at Endy, Brown told her that her kids had gone to the school.

Her first time in Africa, Garcia, who’s originally from Colombia and has taught the dual language program at Endy for three years, said there were so many things going through her head when she first arrived.

“Not even in my craziest dreams did I ever think about coming to Africa or Zimbabwe, because it’s just not a destination that you sit and say, ‘Okay, for my vacation I’m going to Africa,’ ” she said, noting she felt “so blessed, happy and overwhelmed” about being there.

An especially impactful experience occurred the day after the group arrived, when they toured Mgadla Primary School in the Matabeleland region, part of southwestern Zimbabwe.

The rural school was without electricity and running water. Instead of a bathroom, Garcia said students and teachers used a hole in the ground.

The group visited two teachers in a small classroom, who were instructing 35 students of varying ages, from preschool through second grade.

One of the teachers told Garcia about a student with learning difficulties who was at Mgadla because the girl’s parents could not afford to send her to another school that could better attend to her needs.

As their first real experience with the educational system in the country, it was a wake-up call for the teachers, revealing how conditions can vary considerably when outside the United States.

“We were all like, ‘Oh my goodness,’ because all the things we have in the states and these people are lacking everything,” Garcia said.

Brown was impressed by the students’ resiliency and that despite the many obstacles — including walking several miles to and from school each day — the students were never dismayed by the conditions.

“What was amazing to me was that those kids appreciated their education and they wanted to be there,” she said.

Unlike in Stanly County, where teachers typically don’t have classes much larger than 30 students, many of the classrooms in Zimbabwe were overflowing with students.

At the White Water Primary School, the teacher-to-student ratio was unlike anything Garcia had seen before. In one of the kindergarten classrooms, a teacher was instructing about 50 students.

Having such a large classroom, “they can’t help everybody as they wish,” Garcia added.

Garcia and the other teachers got the chance to branch off to various schools in the area and help teach some of the students.

Garcia spent time at Petra Primary School, where she worked in four classrooms covering students from kindergarten, first and second grades. Using English as a common language, she taught them basic Spanish. She recalls interacting with one second grade child who had some familiarity with the language due to watching the children’s show “Dora the Explorer” and using the dual-language device Duolingo.

“He was saying sentences to me in Spanish and he was so excited that I could talk to them in Spanish,” she said. “It was so much fun.” 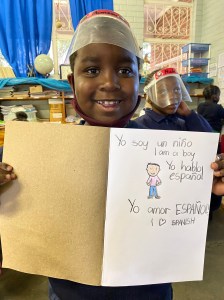 While in Zimbabwe, Karol Garcia met a student who already knew some Spanish, thanks to watching “Dora the Explorer.” Photo courtesy of Karol Garcia. 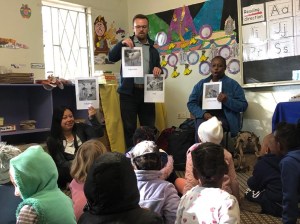 The teachers also spent a few days at the more affluent Victoria Falls Primary School, where they co-taught alongside the school’s teachers. Garcia worked with the school’s language teacher and even learned a few words in Ndebele, one of the languages spoken in Zimbabwe. Everything that was communicated in Ndebele, Garcia said, the kids wanted her to then translate into Spanish.

Brown, who used to teach interior design, taught students about home design, including building floor plans and what it takes to furnish a home. While all of the students had access to computers, Brown said the lack of reliable internet connectivity was a recurring obstacle.

“It was great and frustrating all at the same time,” she said.

She was told afterwards by the school’s computer teacher, whom she worked alongside, that he will have his students design living quarters using some of the online programs Brown highlighted, since Victoria Falls is shifting towards becoming a boarding school.

Brown also toured the school’s Innovation Station, where students as young as 5 were learning how to code. That left an impression, as students don’t start coding in Stanly County until they’re in high school. 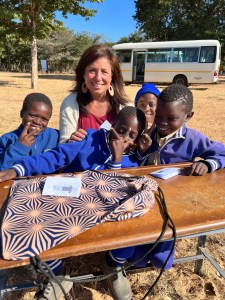 Karen Brown with students from the Jabulani School. Photo courtesy of Karen Brown.

The teachers also had plenty of time to sight-see, including taking a sunset cruise along the Zambezi River, touring the Victoria Falls waterfall, one of the largest in the world, and spending two days on safari at Robins Camp in Hwange National Park, where they saw giraffes, hippos, lions, crocodiles, and ostriches. They even interacted fed elephants at a nonprofit sanctuary.

“It was like what you see in the movies where you’re riding out into the bush and animals are just there, you’re in their home,” Brown said. 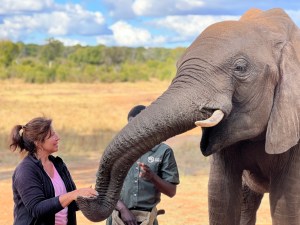 Garcia, Brown and the rest of the teachers fit as much as possible into the 15-day trip.

“We did about a month’s worth of stuff in two weeks,” Brown said about the group’s schedule, adding it took her a week to recover once she got home.

With the new school year about to start, both Garcia and Brown said they want to incorporate what they learned during their trip to help teach students that the world is much bigger than Stanly County. Garcia plans to highlights aspects of the Zimbabwean culture with her students while Brown wants to work with CTE teaches to “share with them more of that global perspective.”

They also would like to find ways to help the schools they visited. Brown, for example, would like to raise about $2,500 so Mgadla Primary School can purchase a solar panel, which would allow students to have access to electricity.

The trip also instilled in each teacher a greater appreciation for their own careers as educators and a resolve to continue helping their students.