2022 – A YEAR IN REVIEW: It was a groundbreaking year for Stanly businesses specializing in beer, liquor 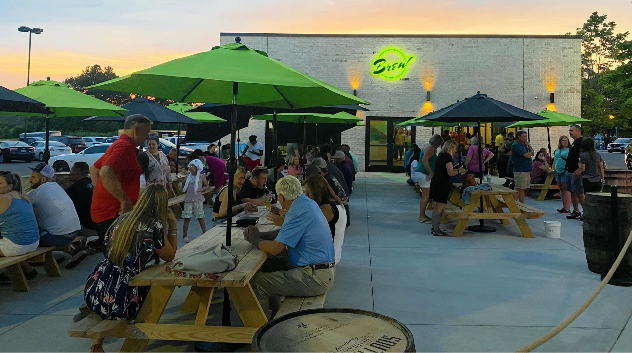 The Brew Room opened in Locust in late May. Photo courtesy of Matthew Harris.

Stanly County’s population grew by about 1.5 percent from April 2020 to July 2021. With an increased population, several new businesses popped up this year to cater to different tastes, including clothing boutiques, restaurants and the county’s first brewery.

According to the Stanly County Chamber of Commerce President and CEO Sandy Selvy-Mullis, her organization participated in 26 ribbon cutting events in 2022 for new businesses, a “large increase over any recent history including years before Covid.”

“Our new membership numbers for 2022 were great,” she said. “This was a trend we started to see in 2020 with our new member numbers growing each year. We’ve also been happy to keep our retention rate of renewing members strong.”

The Stanly News & Press took a look back at two businesses that were firsts in 2022, speaking with owners about how they have been doing and their outlook for 2023.

One of the biggest happenings in the county this year was the opening of The Brew Room in Locust in late May, which was Stanly’s first brewery.

Owned by the same group that opened The Local Room in 2020, The Brew Room is in Locust Town Center, directly across from City Hall.

The 4,600-square-foot location, which can seat around 100 people, features a variety of spaced-out wooden tables and a bar that extends throughout most of the interior. There are also outdoor dining spaces by the patio.

The brewery produces four of its own beers — The Mysterious Pearl IPA, Darker Than Brown Ale, Hell’s Half Acre Black IPA and Winter Warmer —  all of which have “outperformed our expectations,” according to co-owner Matthew Harris. Some of the top-selling food items include Philly cheesesteak, fish tacos and the pickle brined chicken sandwich, which was recently added to the menu. 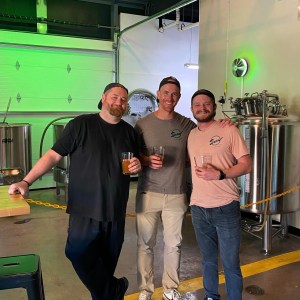 Matthew Harris, center, along with two of the three other co-owners Matthew Klepp and Christopher Kunkel. Photo courtesy of Matthew Harris.

When originally designing the concept, Harris said the intention was to create an inviting space where everyone would be welcome.

“We really wanted to develop what we call a ‘Cheers’ mindset, referencing the TV show that a lot of us grew up watching,” Harris said. “The idea is that everyone belongs here and everyone has a home here. When you walk through the doors, you’re greeted as if you’re a family member coming over to hang out.”

In addition to its food and drink offerings, The Brew Room has weekly and monthly events, such as karaoke and trivia nights and live music featuring performers including Dustin Curlee.

In looking forward to 2023, the brewery is aiming to expand from producing four of its own beers to having eight.

“We didn’t simply want to start a brewery, we wanted to add to our community,” Harris said, “and it feels really good seeing that come to fruition.”

Another brewery is on the horizon, as Uwharrie Brewing, located in downtown Albemarle behind City Hall, is expected to open in the coming weeks.

Adding another chapter to a proud family history

Another business just getting off its feet is The Loping Crow Distillery, located on the Dennis family farm on Endy Road, across from Dennis Vineyards.

Loping Crow Distillery opened its doors for a preview on Dec. 17 for tastings and bottle sales of its first three spirits — Out of the Woods White Whiskey, Two Sisters Vodka and Scout 74 Straight Bourbon Whiskey. The distillery was also open for holiday shopping and tastings Dec. 23-24. 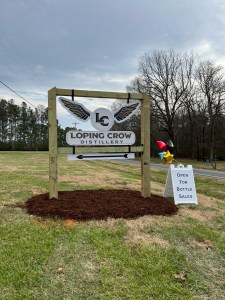 Loping Crow Distillery opened in December for preview tastings and will be open full-time in January. Photo courtesy of Michele Goodwin.

Taking inspiration from the usual gait of a crow that was crossing the family property a few years ago, Dennis and his daughters started the business as a way of honoring their family’s history of producing liquors.

Spirits had been made on the family’s farm over the years, including by Lonnie Lambert, a soldier on the front lines during World War II who was Harrell and Goodwin’s maternal grandfather. The sisters still have a bottle of his peach brandy. The tradition was eventually passed down to Dennis, who has enjoyed sharing his knowledge with Goodwin and Harrell.

“Loping Crow Distillery started with a recipe, a dream and a desire to keep an 81-year-old father, grandfather and great-grandfather out of jail. If he’s going to make whiskey, it’s got to be legal,” Goodwin said.

The family’s corn whiskey is the foundation for each of the drinks, aside from the brandy. When distilling the spirits, the family used Lonnie Lambert’s white whiskey and peach brandy as their benchmark.

“There’s a joy and a pride in being able to take something that your family has done and continue it,” Harrell told the SNAP in September. “You feel like you have generations behind you pushing you forward.” 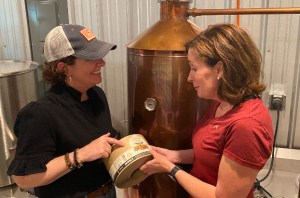 Michele Goodwin with her sister Maria Harrell opened the distillery along their father Tony Dennis.

Looking to 2023, Goodwin said the distillery will introduce new spirits such as its Scout 74 Barrel-Proof Bourbon, Homestead Immature Brandy and Lemonshine Whiskey Lemonade.