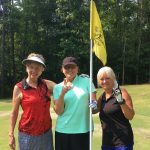 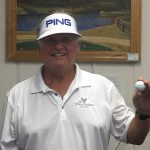 Jim Blair (above left) and his sister, Barbara Overcash (center in above photo), come from an athletic family. Their father, JC, is in the Stanly County Sports Hall of Fame for his accomplishments in baseball. Jim had his fourth ace at Piney Point Golf Club this month at Hole 14. Barbara had her third ace while playing with her friends at Tillery Tradition the next day. Piney Point head professional Dave VanDeventer was an assistant professional at Badin at Stanly County Country Club in 1981 when Jim had his first ace at the 18th hole in the member-guest tournament inwhich he won a car. Pictured with Barbara Overcash are Diane Roberts, left, and Terri Large.