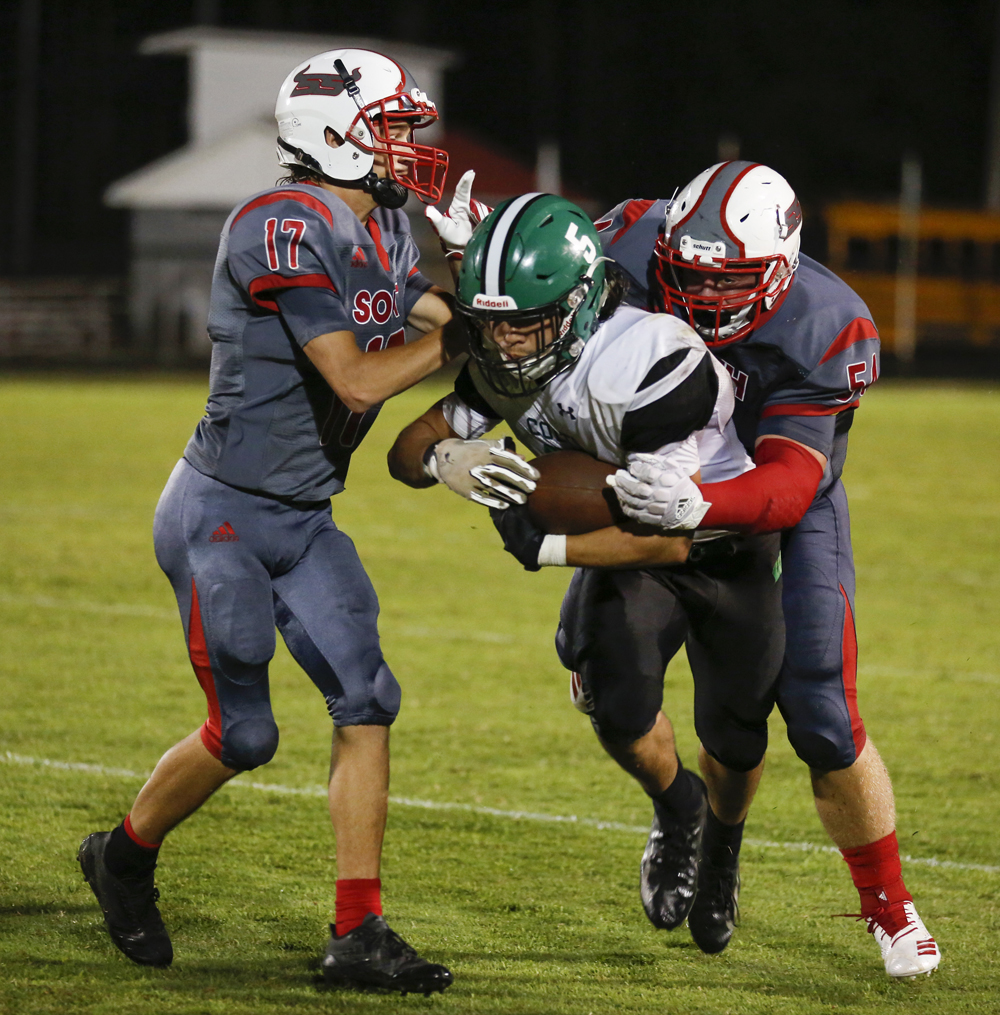 West Stanly head football coach Brett Morton stressed offensive execution this week as the Colts got prepared for the team’s third and final county game of the season.

However, it was the Colts’ defense which produced two pick sixes as the Colts staved off a late Bulls charge for a 20-17 road win.

Lukas Scott had the lone offensive touchdown for the Colts (2-2), finishing with 37 yards on 12 carries. As a team, West rushed for 41 yards on 30 carries.

It was the Colts’ defense which rose to the occasion Friday, picking off three passes and recovering a fumble. Scott and Jordan Poole each returned picks for touchdowns.

South (2-2) was missing its projected starting quarterback for the season, Jaquez Cooke, still out with a hand injury. Justin Gaddy, in his fourth start for South at QB, threw for 73 yards on 4-of-15 passing.

The Bulls did the most damage offensively on the ground, rushing for 251 net yards on 48 carries. Khris Mayo led the way with 128 yards on 21 carries despite leaving the game late in the first half with an injury. He was helped off the field, apparently unable to put weight on his right foot.

Penalties also hampered both teams in the game. The Bulls were whistled for 15 penalties for 163 yards while West had 75 penalty yards on eight flags.

South took the opening kickoff and went 53 yards down the field in eight plays. Brandon Crump connected on a 27-yard field goal to give the Bulls the early lead.

West failed to get a first down on its first two drives, punting the football to the South 24 with 1:40 left in the first quarter. On the next play, Gaddy was picked off by Scott who rumbled 27 yards down the middle of the field for a touchdown. Aldo Cruz’s 35-yard extra point, after an unsportmanlike conduct call, put the Colts ahead 7-3.

South had possession of the ball for the majority of the second quarter.

Taking the ball at the Bulls 30 at the 10:30 mark, the hosts drove all the way down to the 1-yard line in eight plays, coming up short of the goalline. However, an unsportmanlike conduct penalty backed the Bulls to the West 16. Three runs for negative yardage plus four more penalties backed the football up to midfield. South gave the ball up on downs on a 21-yard fake punt run by Tyreke Watkins.

A Scott fumble at the West 30 gave South a chance late in the first half to score. Four plays later, Green found the endzone on a 14-yard run. Crump’s extra-point attempt went wide and left the Bulls up 9-7 in the final minute of the second quarter.

In the third quarter, West drove 63 yards on seven plays, including another 15-yard penalty against South for unsportsmanlike conduct, midway through the period. Scott capped off the drive with an 11-yard TD run up the middle. Cruz’s point after put the Colts back up 14-9.

On the ensuing possession, Gaddy tried a short pass to the visiting sideline. Poole made a one-handed interception and raced down the sideline for a touchdown. A bad snap on the point after left the Colts up by 11.

In the fourth, South drove 75 yards in 11 plays, converting two third downs which included a roughing the passer call on West. Watkins scored from 11 yards out, then Marcus Green’s two-point conversion made it a one-possession game, 20-17.

South had two drives in the final four minutes of the game but West’s defense stopped South on the first drive and Jaquan Ingram picked off a Gaddy pass in the final minute.

Regarding West’s defense, Coach Morton said “we have performed phenomenally” outside of Week 1’s loss. He added “it was what we stressed in the offseason, getting better tackling. We put our best athletes on defense.”

West Stanly goes to West Montgomery (1-2) next week. The Warriors lost at home to East Montgomery, 42-14.

South Stanly is idle this week and will be at home Sept. 21 opening conference play against South Davidson (1-2). The Wildcats won Friday night at Atkins, 36-23.